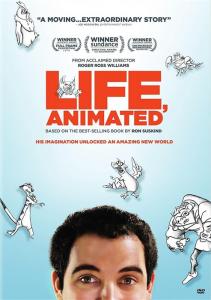 At three years old, a chatty, energetic little boy named Owen Suskind suddenly stopped speaking and disappeared into autism. Almost four years passed and the only thig that seemed to engage Owen were Disney films. Them one day his father donned one of his son's puppets?lago, the wisecracking parrot from Aladdin-and asked "What's it like to be you?" Suddenly Owen responded to his father using dialogue from the movie.

Directed by Academy Award-winner Roger Ross Williams (2009, Best Documentary ? Short Subject, Music by Prudence), Life, Animated tells the remarkable story of how Owen found a pathway to language and a framework for making sense of the world through Disney animated films. By evocatively interweaving classic Disney sequences with verite scenes from Owen's life, the film explores how identification and empathy with characters like Simba, Jafar, and Ariel create a context for him to understand his feelings and interpret reality, Beautiful, original animations further give from to Owen's rich dialogue with all the Disney classics as he imagines himself heroically facing adversity in a tribe of sidekicks. With an arsenal of narratives at his disposal Owen rises to meet the challenges of adulthood in this moving coming-of-age tale.