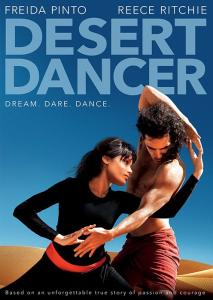 Set against the backdrop of Iran's volatile 2009 presidential election, this powerful film follows the incredible true story of renowned international dancer Afshin Ghaffarian. At a time when dancing is forbidden, Afshin (Reece Ritchie, Hercules) and some friends, including the beautiful Elaheh (Freida Pinto, Slumdog Millionaire) risk their lives to form an underground dance company. Inspired by banned online videos of timeless legends like Michael Jackson and Rudolf Nureyev, Afshin and Elaheh embrace their passion for dance ? and for one another. With palpable tension, breathtaking choreography and spectacular cinematography, Desert Dancer is a story of extraordinary courage, love and the fulfillment of dreams.